A place for lore, scribbles, and everything feline

The Witcher: The Myth of Pasty Slavs

This entry is a loose translation of SMiki Lorebringer’s original post on the subject.

News about Netflix planning to adapt Andrzej Sapkowski’s opus magnum triggered a wave of enthusiasm in the Witcher’s fanbase, from casual fans of the game series to fanatically loyal legions of bookworms and con goers. As usual, speculation and discussion followed, focusing on every possible aspect.

As usual, casting questions quickly came to the fore.

Of Casting and Fans 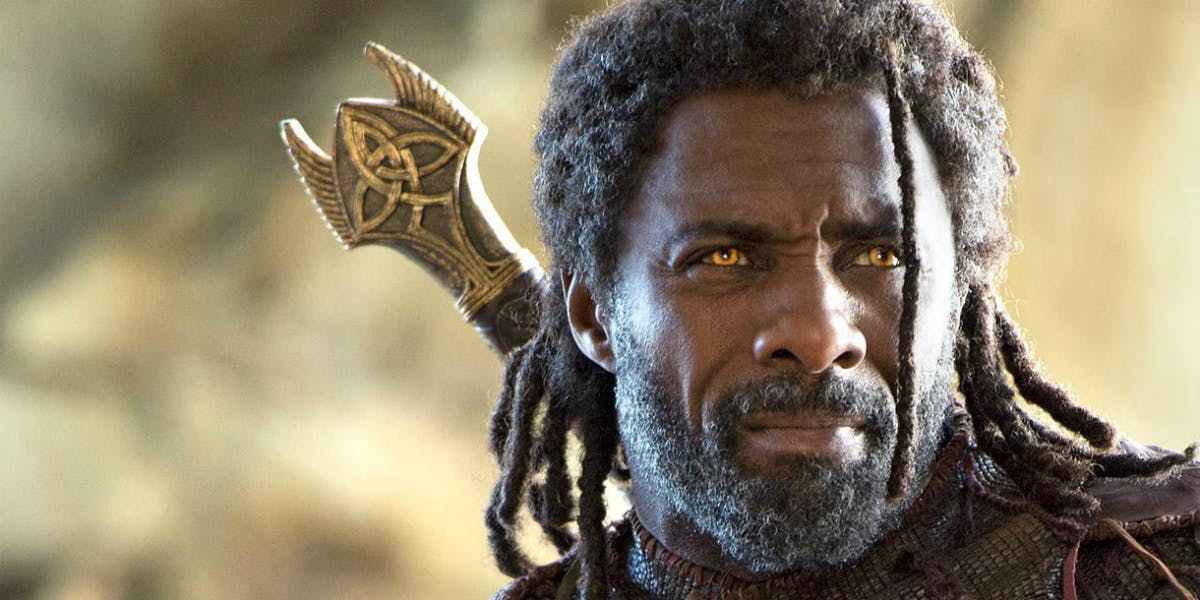 This pic of Idris Elba is here by accident, I assure you.

It would not be an exaggeration to say that casting remains the single most contentious point since the time our ancestors climbed down from the trees and learned to cave each other’s skulls in. Whenever someone tries to adapt a beloved series for screens big and small, doubts and fears start to proliferate.

Who can portray the heroes of the story in a way that captures their personalities, quirks, and appearance?

Who can take on the burden of playing the lead part of a beloved protagonist?

The stakes are invariably high. Hell hath no fury like a fanbase slighted by casting choices, and will waste no time bringing fire and brimstone on the director/producer/leads/people playing minor parts. In a way, it’s their right, as any adaptation stands on the shoulders of the original and taps into the fanbase’s love. THEY kept the franchise alive, it’s THEIR golden calf, THEIR object of worship, THEY are the first in the queue at the cinema or refreshing streams waiting for the first episode to hit.

The resulting obsessive attention to detail might raise eyebrows, but it can help create an adaptation that remains faithful to the original, appealing to fans both new and old.

However, the question of what is faithful is an age-old problem and the Witcher fandom, especially in Poland, is no exception.

State of the Franchise

Choices and consequences or adapting fantasy landmarks on a budget. Above is a still from the infamous TV series that started the Pure Slavic Witcher Myth, showing the dazzlingly white Temerian court.

The Witcher saga spans eight books: Two sets of novellas, a series of five novels, and another stand-alone novel. Their snowballing popularity led to four major adaptations: A comic book series, a TV series, a pen-and-paper role-playing game, and a video game series. The reception was, respectively, apathetic, abysmal, lukewarm, and record-breakingly enthusiastic.

Here’s where the idea of the Witcher being distinctly white and Slavic originated: With the exception of the P&P role-playing game, all adaptations drew heavily on fictionalized portrayals of Polish country life and paganism in an effort to create a distinct “Slavic” aesthetic. Architecture, costumes, weapons, even the very alphabet used in the Northern Kingdoms drew on what was immediately available to their creators.

There is a single problem with this: It runs counter to the saga, which emphasized the diversity of cultures inhabiting the world of Geralt, Yennefer, and Cirilla. However, by the time the second video game hit the market, the damage was already done. The presumption that Witcherland is distinctly Slavic caused a portion of the fanbase to claim that Assassins of Kings was neutering the setting by simply drawing more diverse range of cultures.

The situation only turned worse with the release of The Wild Hunt. Although critically and commercially successful, the game received a few criticism over the lack of ethnic diversity among its characters: Despite involving nearly every single nation in the known world, the characters were almost invariably white, ranging from the pasty to tanned.

The reaction was immediate: The fandom decried these criticisms as non-whites infringing on their white, Slavic, European world – fouling the Polish national heritage.

(Note: Despite their insistence, a white, Slavic Poland is a concept that dates back to 19th century romanticism, tied to Polish nationalism that emerged as a reaction to its partitioning; for most of its history, it wasn’t predominantly white or even majorly Slavic, all the way to the Piasts of the 10th and 11th century, who happily imported everything Western and exported all over Europe, including slaves to Al-Andalus)

Of Settings and TV Series

Robert Alott, Oriental Street Scene. With the world first inhabited by gnomes and dwarves, then partially conquered by elves and finally seized by imperious humans fleeing another world, diversity, eclecticism and juxtaposition define the world.

As such, it shouldn’t surprise that when Netflix announced its plans for an adaptation – led by an American woman no less – the fandom instantly started fretting about these outsiders soiling the purity of their beloved setting.

However, would a multicultural adaptation be violating the pure, white fabric of the Witcherverse? Or would it be simply a return to the roots?

This question is easily answered by the most casual reading of the saga. Beneath a linguistic aesthetic that draws on Polish literary staples, particularly Henryk Sienkiewicz’s historical fiction, lies a diverse amalgam of different cultures and ethnicities.

The richness comes to the fore as soon as people start mentioning cities. In Temeria, the Slavic-sounding Wyzima and Maribor exist side by side with the Romanic Garramone and La Valette, Anglo-Saxon Anchor and Spanish Carreras. The Celtic Aedirn is ruled by Demawen, named after Iran’s tallest peak, whose seat of power is located at the Germanic Vengerberg.

The examples of this diversity grow in number the deeper we go. Slavic elements, like the drowners, based directly on Slavic topielce, exist side by side with Greek mantikores, Arabic ghouls and djinni, Sumerian Ekimmas, and more. The philosophies of the world draw on countless sources, putting the Egyptian-Greek Ouroboros side by side with the Chinese Yin-Yang, Greek cynicism, and diverse cults of mother goddesses.

Even the names of the characters inhabiting the word defy the notion of it being purely white and Slavic. Redania has kinds called Vizimir and Radowid, and the eldest of the Wolf School witchers is called Vesemir. However, they share the world with King Esterad Thyssen of Kovir, who bears an Arabic first name and a Germanic last name, Queen Meve with a distinctly Irish name, the aforementioned Persian Demawend, Greek Calanthe, Welsh Em(h)yr, Dutch Dijkstra,…

Finally, none of our lead characters bear names that are ostensibly Slavic. Take, for example, Yennefer, who bears a slightly modified Cornish name.

Anyone who read the saga shouldn’t be surprised by this seemingly random diversity: Humans are not native to the Continent. They aren’t even native to the planet where the Continent is located, being refugees from another dimension who escaped there after ruining their original planet. Given the cultural diversity of just the Northern Kingdoms, it is impossible that the only refugees to board the ships and cross the threshold into another world during the Conjunction would be pasty-faced Europeans.

Vernet Claude-Joseph – Imaginary scene, an Italian harbor. Might as well be coastal Skellige, if you remove two parts hygiene and one part habitability.

A more careful reading of the saga and the novellas will reveal that this was not the case. for instance, the population of Skellige is depicted in the games as stereotypical white Vikings. However, the source material describes them as having a swarthy complexion common to Mediterranean peoples, while their culture is an eclectic mix of Scandinavian and Irish elements.

Beyond the continent, there are the distant lands of Ofir, Zangwebar, and Hannu, separated by vast seas or lands, mentioned in the “Bounds of Reason” and “A Shard of Ice” novellas. The names are distinctly non-European:

These countries are hardly just window dressing. All coastal realms on the Continent engage in trade with these countries, through their great port cities: Novigrad, Cidaris, Gors Velen, Pont Vanis, Lan Exeter, and Cintra (before its destruction). They are gateways, great melting pots, mixing people, goods, and cultures together. Whether it’s Cidaris filled with galleons unloading goods from half a world away to sell on the famed Sea Bazaar or Novigrad, where Zangwebarian mimosa bark is in high demand, they are places where local people will mix with foreigners of all walks of life, like in Venice, Cordoba, Lisbon, Byzantium, and other great coastal cities.

Sapkowski himself openly slammed mono-cultural fiction, where the possibilities offered by diverse, multi-cultural casts are completely ignored in favor of a single, homogeneous blob. To deny Witcher diversity, to turn it into a shallow remix of pop-cultural Slavic tropes, is tantamount to ripping out its heart.

The Continent is a vast, wonderfully diverse place that trades and interacts with a variety of similarly diverse cultures, human and otherwise. It is a place where a black Dijkstra is not an “abomination pushed by Social Justice Warriors”, but a real possibility that can help emphasize the rich lore of the Witcherverse and its myriad inspirations.

The world of Geralt, Ciri, and the Urcheon of Erlenwald deserves nothing less!

Disguised as a merchant, Dijkstra contemplates buying a special blade to stab Geralt in the face. He does hold a grudge over Thanedd.

I'm the cat around these here parts.